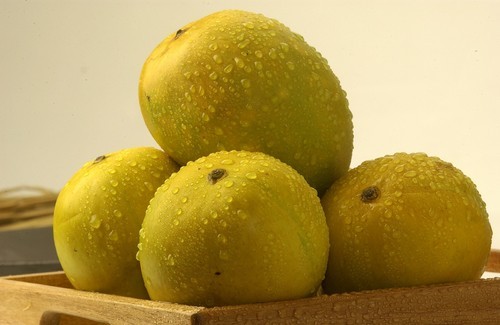 Devgad Alphonso Mango is a seasonal fruit, considered to be among the most superior varieties of the fruit in terms of sweetness, richness and flavour. The mango is a juicy stone fruit (drupe) belonging to the genus Mangifera, consisting of numerous tropical fruiting trees, cultivated mostly for edible fruit. The majority of these species are found in nature as wild mangoes. They all belong to the flowering plant family Anacardiaceae. The mango is native to South Asia,from where it has been distributed worldwide to become one of the most cultivated fruits in the tropics. The center of diversity of the Mangifera genus is in India. While other Mangifera species (e.g. horse mango, Mangifera foetida) are also grown on a more localized basis, Mangifera indica—the "common mango" or "Indian mango"—is the only mango tree commonly cultivated in many tropical and subtropical regions.It is the national fruit of India, Pakistan, and the Philippines, and the national tree of Bangladesh. The variety is believed to be named after Afonso de Albuquerque, a nobleman and military expert who helped establish Portuguese colonies in India. The Portuguese introduced grafting on mango trees to produce extraordinary varieties like Alphonso. The fruit was then introduced to the Konkan region in Maharashtra, Gujarat and parts of south India . However this is heavily disputed and it is now believed that it was introduced first in Kerala, as the climate was believed to be more suitable for mass cultivation (rainfall was notorious for destroying crops in Maharashtra). It is also one of the most expensive varieties of mango and is grown mainly in the western part of India including Sindhudurg, Ratnagiri and Raigad districts and in the Konkan region of India. Each mango weighs between 150 and 300 grams (5.3 and 10.6 oz). Devgad Alphonso Mangoes are widely considered one of the best cultivated Alphonso strains. Alphonso is generally referred to as 'Hapus' () in Maharashtra and Gujarat, and is used to make sweets, candies and smoothies and mango drinks using Alphonso mango pulp. It is also consumed directly after ripe and a favorite fruit in India during summer days.