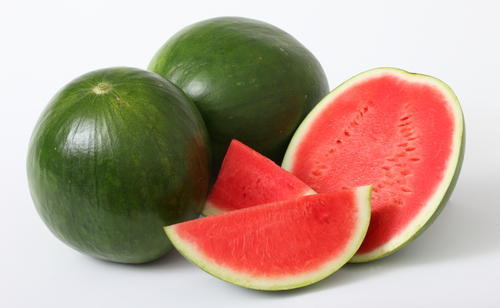 Watermelons are tropical or subtropical plants and need temperatures higher than about 25 °C (77 °F) to thrive. On a garden scale, seeds are usually sown in pots under cover and transplanted into well-drained sandy loam with a pH of between 5.5 and 7 and medium nitrogen levels. Aphids, fruit flies and root-knot nematodes attack this crop, and if humidity levels are high, the plants are prone to plant diseases, such as powdery mildew and mosaic virus.

For commercial plantings, one beehive per acre (4,000 m2 per hive) is the minimum recommendation by the US Department of Agriculture for pollination of conventional, seeded varieties. Because seedless hybrids have sterile pollen, pollinizer rows of varieties with viable pollen must also be planted. Since the supply of viable pollen is reduced and pollination is much more critical in producing the seedless variety, the recommended number of hives per acre, orpollinator density, increases to three hives per acre (1,300 m2 per hive). Watermelons have a longer growing period than other melons, and can often take 85 days or more from the time of transplanting for the fruit to mature.

In Japan and other parts of the Far East, varieties are often grown that are susceptible to fusarium wilt, and these may be grafted onto disease-resistant rootstocks. Farmers of the Zentsuji region of Japan found a way to grow cubic watermelons, by growing the fruits in glass boxes and letting them naturally assume the shape of the receptacle. The cubic shape was originally designed to make the melons easier to stack and store, but the cubic watermelons are often more than double the price of normal ones, and much of their appeal to consumers is in their novelty. Pyramid-shaped watermelons have also been developed and any polyhedral shape may potentially also be used. These shaped watermelon are often harvested before optimal ripeness. Because they are bitter instead of sweet, the shaped fruits are considered ornamental instead of food.