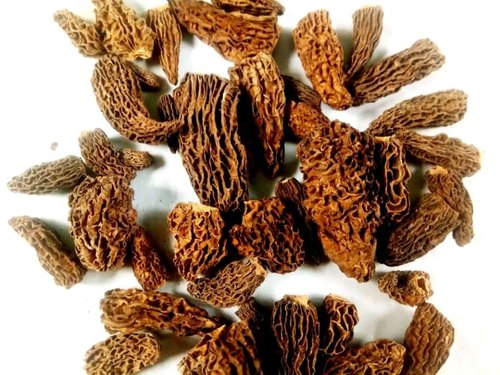 Morels are one of the most desired wild mushrooms in the world. They are not farmed like most grocery store mushrooms, Cremini, Portobello, Oyster, etc. but gathered in the wild. The part that we eat is the fruiting body of the underground organism called mycelium that has a complex symbiotic relationship with trees.

Morchella, the true morels, is a genus of edible sac fungi closely related to anatomically simpler cup fungi in the order Pezizales (divisionAscomycota). These distinctive fungi have a honeycomb appearance due to the network of ridges with pits composing their caps. Morels are prized by gourmet cooks, particularly in French cuisine. Due to difficulties in cultivation, commercial harvesting of wild morels has become a multimillion-dollar industry in the temperate Northern Hemisphere, in particular North America, Turkey, China, the Himalayas, India, and Pakistan, where these highly prized fungi are found in abundance.

Typified by Morchella esculenta in 1794, the genus has been the source of considerable taxonomical controversy throughout the years, mostly with regard to the number of species involved, with some mycologists recognising as few as three species and others over thirty. Current molecular phylogenetics suggest there might be over seventy species of Morchella worldwide, most of them exhibiting high continental endemism and provincialism.

The genus is currently the focus of extensive phylogenetic, biogeographical, taxonomical and nomenclatural studies, and several new species have been described from Australia, Canada, Cyprus, Israel, North America, Spain, and Turkey.

Button Mushroom (Agaricus spp.) is the most popular mushroom variety grown and consumed the world over. In India, its production earlier was limited to the winter season, but with technology development, these are produced almost throughout the year in small, medium and large farms, adopting different levels of technology. The species being grown in most farms is the white button mushroom (Agaricus bisporus) belonging to Class Basidiomycetes and Family Agaricaceae.