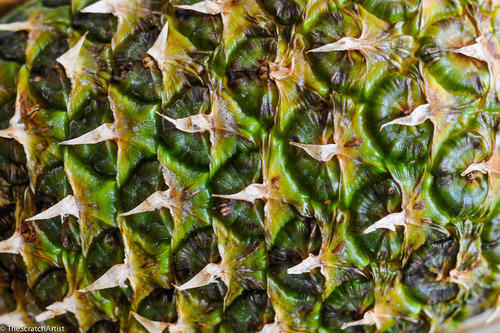 The pineapple (Ananas comosus) is a tropical plant with edible multiple fruit consisting of coalesced berries, also called pineapples, and the most economically significant plant in the Bromeliaceae family. Pineapples may be cultivated from a crown cutting of the fruit, possibly flowering in 20–24 months and fruiting in the following six months. Pineapple does not ripen significantly post-harvest. Pineapples can be consumed fresh, cooked, juiced, or preserved. They are found in a wide array of cuisines. In addition to consumption, the pineapple leaves are used to produce the textile fiber piña in the Philippines, commonly used as the material for the men's Barong Tagalog and women's Baro't saya formal wear in the country. The fiber is also used as a component for wallpaper and other furnishings.

The flesh and juice of the pineapple are used in cuisines around the world. In many tropical countries pineapple is prepared and sold on roadsides as a snack. It is sold whole or in halves with a stick inserted. Whole, cored slices with a cherry in the middle are a common garnish on hams in the West. Chunks of pineapple are used in desserts such as fruit salad, as well as in some savory dishes, including pizza toppings and a grilled ring on a hamburger. Crushed pineapple is used in yogurt, jam, sweets, and ice cream. The juice of the pineapple is served as a beverage, and it is also the main ingredient in cocktails such as the piña colada and in the drink tepache.